You will receive an email confirmation with an attached voucher to present to your On Locations Tour guide.  Please arrive 15 minutes early and bring valid ID. 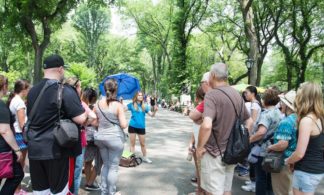 The NYC TV & Movie Tour is a guided sightseeing bus tour that explores TV and movie locations in New York City. Throughout the journey, you’ll follow in the footsteps of your favorite characters when you hop off at different movie hotspots for some great pics!.

The tour travels through much of Manhattan while highlighting the specific TV and movie locations that are the tour’s focus. As a result, families and groups often find this tour an ideal fun way to explore the city. So, sit back and relax as your tour guide leads you through the most filmed city in the world. They will take you on a tour of the city’s most recognizable locations, sharing with you some of the TV and film industry’s best-kept secrets.

The NYC TV & Movie Tour travels through much of Manhattan while highlighting the specific TV and movie locations that are the tour’s focus. As a result, families and friends often find this tour an ideal way to explore the city!

The experience begins in the heart of New York City, Times Square. See where Kimmy and Titus sing their hearts out in Unbreakable Kimmy Schmidt. Pass the famous steps where the cast of Glee sang a version of “I Love New York/New York, New York” in the Season 2 finale, and where Jamie introduced Dylan to the word “Flash Mob” in Friends with Benefits. Then pass the bar where Michael Keaton has his post-performance drink in Birdman.

As you venture into Columbus Circle, you’ll see famous buildings like The Time Warner Center and Trump International, home to some of the most expensive real estate in the country. Appearing in and movies like Tower Heist, Enchanted and Ghostbusters, Columbus Circle is a New York staple that cannot be missed.

As you venture down Central Park South, you’ll get a glimpse of the locations that have set the stage in a number of the industry’s latest and greatest. See the most filmed building in the world, The Plaza Hotel, as seen in films such as American Hustle, The Great Gatsby, Bride Wars, Home Alone 2: Lost in New York, and Crocodile Dundee. The Plaza’s Oak Room Bar set the stage Hitchcock’s North by Northwest and was featured in the last season of Mad Men. Out front is the beautiful Pulitzer Fountain that was replicated in the opening credits of Friends and where Blair and Serena danced on Gossip Girl.

Check out the famous locations from New York City’s funniest sitcoms on the exclusive Upper East Side. See Barney’s, where Elaine from Seinfeld buys a dress, only to realize it looks horrible on her. Then see the Pierre Hotel where Monica and Chandler tie the knot in Friends.

Continue your adventure, and you’ll see the famous Fifth Ave stores that have been used in many films. Pass by FAO Schwarz, most famous for its role in the movie BIG, and see Tiffany & Co., which was featured on screen in Breakfast at Tiffany’s, Glee and New Year’s Eve.

Cruising down Fifth Avenue the NYC TV & Movie Tour takes you past yet another Trump Tower that you’ll recognize as Wayne Enterprises in The Dark Knight. Next pass the St. Regis Hotel, as seen in The Devil Wears Prada, Taxi Driver and Miss Congeniality. You can’t miss Rockefeller Center, home to NBC Studios where The Tonight Show, Saturday Night Live, The Today Show, and countless other TV shows and movies film. Most recently Marvel’s Daredevil featured a tense scene between Fisk and Madame Gao at the same rooftop garden Spider-Man swings onto with Mary Jane in Spider-Man. See the New York Public Library, a filming location for Ghostbusters, Ted 2, 13 Going 30, Sex and The City: The Movie and catch a glimpse of the Empire State Building, featured in King Kong, Sleepless in Seattle and An Affair to Remember.

The journey continues as you approach the Flatiron Building, which you’ll recognize from Spider-Man, Teenage Mutant Ninja Turtles, and the scene from The Other Guys when Samuel L. Jackson and Dwayne “The Rock” Johnson leap from the top. Across the street is Madison Square Park, where Ron Burgundy fights the ultimate battle of the news teams in Anchorman 2. You may also recognize this park from I am Legend, The Adjustment Bureau and Something Borrowed

Your first stop on the tour is one of New York’s most famous landmarks, Washington Square Park.  It’s here where Glee, The Mindy Project, Don Jon, Blue Bloods and countless other movies and TV shows filmed.  Around the corner, you can spot the Comedy Cellar where Louie performs in Louie and the McDonald’s where Julian demands breakfast in Big Daddy.

The Tribeca area, famous for its annual film festival founded by Robert De Niro, is also a great location for filming. Your tour guide will escort you for a photo-op at the FDNY Hook & Ladder 8, known as the Ghostbusters’ Firehouse, also seen in Hitch and Seinfeld.

In Greenwich Village, your guide will lead you off the grid, literally into the maze of one-hundred-year-old townhouses and cobblestone streets. You’ll appear in a familiar place, the perfect photo-op outside the apartment building that was home to Monica, Chandler, Joey, and Rachel from Friends.

In the Meatpacking District, you’ll see the Standard Hotel which houses the Boom Boom Room, that you’ll recognize from Gossip Girl and The High Line, one of New York’s newest parks featured in Hitch, GIRLS, and The Mysteries of Laura. Hovering high above is The Highline Hotel, whose grounds were often featured as fictional “Hudson University” in Law and Order SVU.

Moving through Chelsea you’ll see Empire Diner from Men In Black II and Home Alone 2. Pass the Star on 18 Diner where Abby and Ilana recover after an all-nighter on Broad City. Even see the Chelsea Television Studios where The Wendy Williams Show and The Rachael Ray Show are filmed.

Making your way through Midtown you’ll find the famous Macy’s in Herald Square, used in holiday favorites Miracle on 34th Street and Elf. See the Time-Life Building, featured in Mad Men as the new Sterling Cooper Draper Pryce office. You’ll catch a glimpse of the original “Al’s Soup Kitchen” from Seinfeld and the Bank of America Tower, which plays the role of “Atlantis World Media” from HBO’s The Newsroom. Even enter the world of Marvel’s Daredevil on Eighth Avenue at the 50th street subway stop, where “Foggy” Nelson places a desperate call to a friend in the NYPD.

The NYC TV & Movie Tour ends at McGee’s Pub, the inspiration for MacLaren’s Pub in How I Met Your Mother, where you’ll have the opportunity to take photos, grab a drink or dine at the spot that inspired the “bromance” between Barney, Ted and Marshall.

* In an effort to stay current, we are constantly updating our tours with new locations and cannot guarantee the presence of locations mentioned on our site.

You will receive an email confirmation with an attached voucher to present to your On Locations Tour guide.  Please arrive 15 minutes early and bring valid ID. 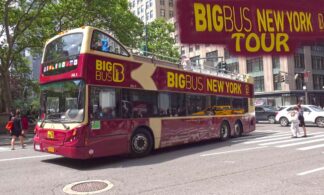 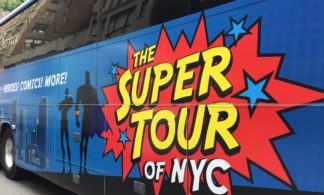